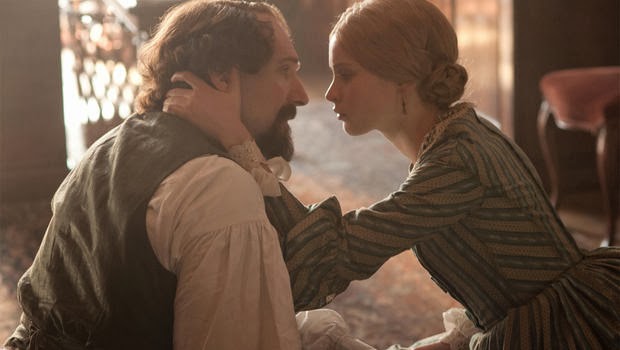 Charles Dickens is one of my favorite authors, not only for his alluring narratives, but also for the strong moral messages in his fiction. Dickens was the principal novelist of the Victorian period and a moral authority of his time. In the present era, it is refreshing to read stories such as Nicholas Nickleby, Little Dorrit, A Tale of Two Cities, and A Christmas Carol - honor, family, and social concerns are central themes.

Dickens did, however, abandon his wife after 22 years of marriage — the draw being a British actress, Ellen (Nelly) Ternan, 27 years his junior. I can hardly convey my surprise at this discovery: he left his home and hid his motives from his children. Only the older son, Charley, knew. But he refused to go with his father.

In The Invisible Woman British novelist Claire Tomalin explores the romance between Charles Dickens and Nelly Ternan. Now, Ralph Fiennes has captured the story on film. Fiennes is the director and principal actor, alongside a cast that includes Felicity Jones, Kristin Scott Thomas, Michelle Fairley, and Tom Hollander. 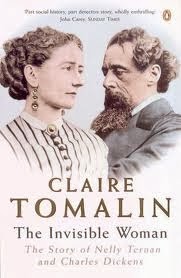 Discovering this chapter in Dickens’s life really hit home. My boyfriend left me for a woman 22 years younger than he was. Why do men have such an interest in younger women? Why do young women have such an interest in older men?
The first question seems easy to answer: youth, geniality, beauty, innocence — feeding the pride and ego of a man. However, that does not rule out the possibility of a truly loving relationship, based on mutual admiration, support, and shared your interests.

This is what I think happened between Dickens and Ternan.

Perhaps the perspective and motives on the side of the woman are more complex. Nowadays, society frowns upon those relationships — and I say "nowadays," because in the past the normal union was between a mature man and a young woman. Today we suspect that there exists an economic reason for the relationship: "She is with that old man because he has money.” But I would add, besides success, power, and money, older men invoke admiration.

Without doubt, a man who has already achieved success in his professional life or is at the peak of his career is much more attractive, since it allows him to present more confidence in himself. And we cannot deny our animal nature: the alpha male is the leader of the pack, after all.

This type of relationship is much more common and socially accepted in academic or intellectual circles, because there is nothing as attractive as an intellectual connection with someone — not to discount the value of physical attraction and chemistry. And I believe they constitute a resilient form of relationship, even if they are less frequent.

In general, relationships in which there is a large age difference are shorter. The age difference presents big challenges. Even if at the beginning there is a lot of interest and passion, it could be difficult to sustain the same feelings over the course of time. Female sexual plenitude happens around age 40, and if the man is more than 15 years older one can see how his age might impede his keeping up.

This does not mean this kind of couple cannot have sexual life, but for many women this can be a major concern. It also affects social life, because as one grows older, we lose interest in social activities and expect a quiet home life. If the woman is much younger and not yet ready for such a quiet tranquil existence, this may lead to boredom, feelings of monotony, lack of motivation, and can result in a loss of interest.

Tomalin's book shows that, in the case of Dickens and Ternan, it was a relationship based on mutual interests. They shared a deep intellectual connection and an intense love for one another. She was an actress, and although it was not a profession loved by Victorian society they did enjoy certain freedoms that other women of the era did not have. In fact, some believe these freedoms are equivalent to those of women in the late 20th century. It is known that Catherine, Dickens’ wife, did not share her husband's interests, while Ternan was known for her intellectual and political interests.

I am anxious to see how Ralph Fiennes plays Dickens in the film, and how he manages to transmit the essence of this romance from the role of director. It is worth mentioning that the former wife of Fiennes, Francesca Annis, is 17 years older than him. Are there personal reasons Fiennes is interested in this true life drama? Perhaps it is just a coincidence, but I will leave you with this: after Dickens’ death, his lover Nelly Ternan married a man 12 years her junior. Interesting, don’t you think?

This article was originally published at the PanAm Post you can see the original article here
Posted by Unknown at 3:20 PM