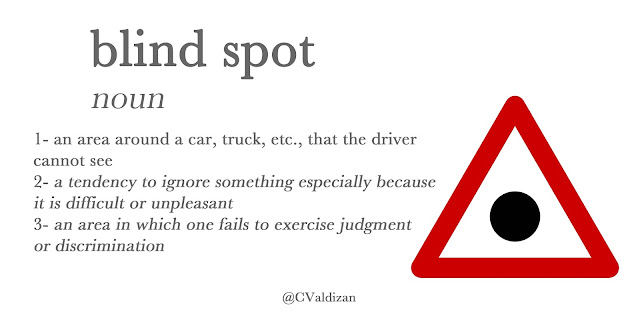 People say that you should never embark on discussions about religion, politics or sports, because is a dead end; and I agree.

We all have our blind spot, a tendency to ignore something, especially because it is difficult or unpleasant. Areas where we fail to exercise good judgment.

My work is related to politics, and for me is a challenge to explain people that, this person or that candidate, that hero of theirs, has as many flaws as their adversary. People have a tendency to find excuses for their behaviour, and that makes my work even harder.

In politics is hard to remain objective, and is a goal that my works asks me to achieve, to make judgements only based on facts, not beliefs.

But hey, I am a human after all and I have a blind spot as well!

On the bright side, as an aspiring writer, dealing with this, and be aware of it; helps me to create and understand my characters better, I can make them more human, and less perfect... more real.
Posted by Unknown at 5:26 PM 2 comments:

Separate Islam and State, or Suffer the Consequences 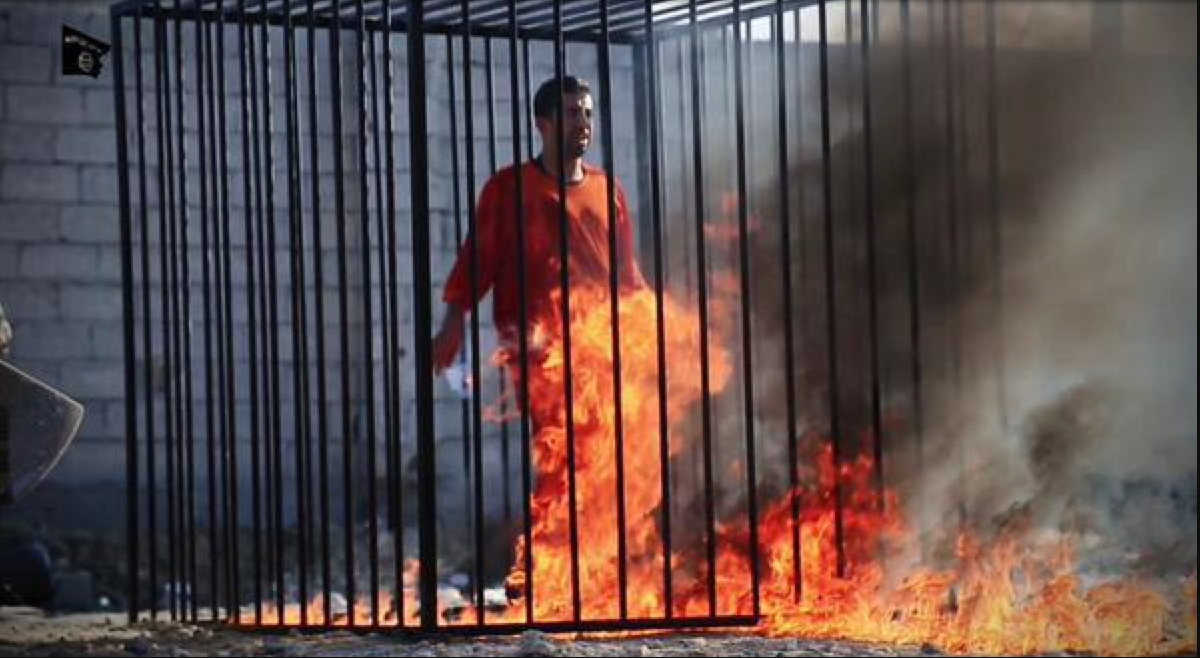 Muslims in western societies are fond of saying that Islam — with 1.6 billion followers, roughly 23 percent of the human race — is a religion of peace. Overwhelmingly Muslim countries like Malaysia, Bangladesh, and Indonesia are largely peaceful, and so are countless Muslims living in the Americas and Europe. They all insist that terrorists, such as those who murdered Charlie Hebdo’s journalists and other unarmed civilians, do not represent them.

But this binary division ignores the fact that there are several kinds of Muslims: the jihadis, militants who carry out terrorism; the Islamists, who use their religion for political gain and finance jihad from a distance; and the fundamentalists, those fervent believers who, while not belonging to jihadist groups, give them religious support. Then you have those who tacitly sympathize with jihad, and finally, there’s a silent minority, the pacifists.
Why silent? Because they’re afraid to speak out, and in many cases rightly so, because to do so would mean being targeted and even killed by the other factions.
The pro-violence groups are not a negligible part of the Muslim world. Even if they were just a handful, history has shown us that a small group can cause great damage if they rise to power. In 1939, for example, only 5.3 million out of 79.7 million Germans were affiliated with the National Socialist Party.
And such groups are in power, in large parts of the world. Half of the Middle East’s countries are ruled by Islamists: Iran, Iraq, Syria, Lebanon, Saudi Arabia, Turkey, Yemen, and Palestine. Underlining and exacerbating the situation is the fact that the rulers of Saudi Arabia have funneled around US$100 billion for the promotion of a radical political Muslim agenda known as Wahhabism over the last 20 years.
Many Muslims believe the Quran is beyond criticism, yet there are different interpretations of it. Al-Qaeda, Islamic State, and Boko Haram militants quote passages to justify their crimes and killing of “infidels.” Moderate Muslims then object that the quotes are taken out of context, or have been poorly translated and misinterpreted. However, most still defend a literal interpretation of the Quran under any circumstances, thus implicitly backing the jihadis.
Much like Christianity and Judaism, Islam is another monotheist religion which by definition is not peaceful. What has kept Christians from continuing with the Inquisition and persecution of non-believers, as mandated throughout the Bible, is the separation of church and state. The Catholic church has committed heinous crimes, but it is no longer in a position to take lives, and has drawn a line under the worst excesses of its history. When the church withdrew from the state, or was expelled, it largely lost its political clout, and in most of the West we have at least accepted the theory of a secular state.
But the majority of Muslim nations have not undergone that transformation, if indeed they ever will. They are still ruled by sharia, a religious law, distinct from civil or criminal codes, that governs every aspect of life, controlling beliefs and behavior both in the public and private spheres. For instance, the death sentence for those who commit apostasy, or “criticize or deny Allah,” remains a very real threat in many parts of the Islamic world.
Violations of sharia are judged in Islamic tribunals and are routinely met with stoning, mutilation, beating, and killing. Muslim law also targets homosexuals, intellectuals, and free-thinkers, but above all it tries to force women to submit.
So how can we reconcile both worlds? Islamic fundamentalists view western civilization as a threat and are bent on fighting it. Unfortunately, many of their leaders misuse their positions of power to preach hate and divorce their followers even further from reality. Of course, there still exist examples of peaceful coexistence, but everyday we see more and more extremists inciting Muslims to violence, from the pulpit and the podium.
Which prominent Muslim leader is unequivocally calling for world peace nowadays?
Translation by Daniel Duarte. Edited by Laurie Blair and Fergus Hodgson.
This article was originally published on January 14th 2015 at the PanAm Post, you can view the article here.
Posted by Unknown at 2:58 PM No comments: